The future plan for the Basin

In 2014, the Basin Reserve Trust led the development of a Masterplan.

This plan presented a 25-year vision for the future of the Basin Reserve. Its key features are to:

To achieve this, we must:

The Basin Reserve Masterplan was endorsed by the Council in April 2015 as a blueprint for redeveloping the ground.  Below is a summary of the works currently underway.

Built in the 1880s, the Groundsman’s Cottage is the oldest structure on the Basin Reserve site. Over the years, the building has been moved to different locations around the ground, with a number of changes made to the outside and inside of the building. In recent times, it was used to house the ground keepers and their equipment.

By 2013, the cottage was in a bad condition and presented a serious health and safety risk to ground keeping staff. As part of the Masterplan, the Council agreed to refurbish the cottage while also creating ground keeping facilities that were fit-for-purpose. This included:

Originally built in 1925 for 16,710 pounds, it became the focal point for major sporting events at the Basin. When the RA Vance Stand was opened in 1981 it took a back seat, then was declared an earthquake risk in 2012 with the roof the major area of concern.

A heritage listed building, it was saved from demolition and then-mayor Justin Lester confirmed a $7.76 million restoration and strengthening project in May 2018 to bring it up to building code, from the $24 million council invested in the Basin over 10 years.

The project involved removing steel, re-cladding and internally strengthening the walls. New concrete was laid over the top of the previous structures to prolong the lifespan of the building to a minimum of 50 years. 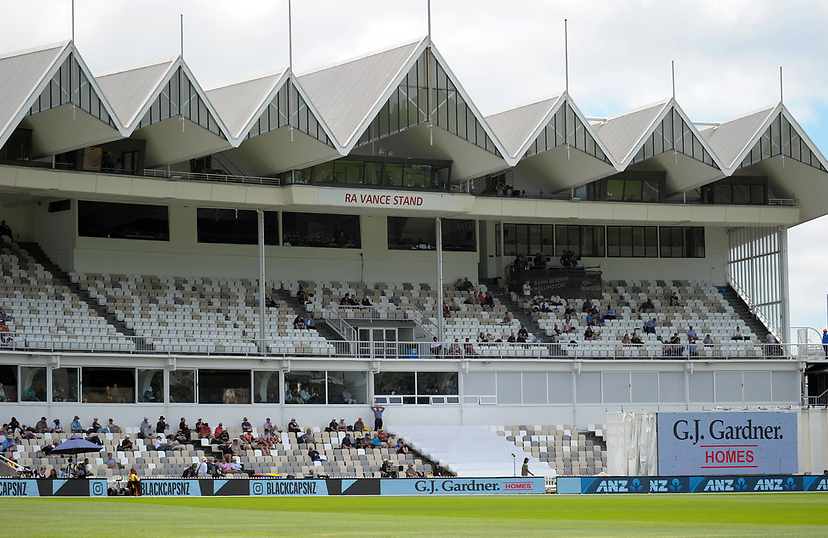 Built in the late 1970s, the RA Vance Stand was a key project in a major makeover of the Basin Reserve, which included constructing the embankment areas, turning the field into an oval, and moving the cricket block to its current position.

The RA Vance Stand and Players Pavilion houses spectator, player and umpire facilities (changing rooms, practice facilities and viewing areas), media facilities and corporate hosting spaces, all of which are needed for the Basin Reserve to keep its status as a compliant test cricket venue by International Cricket Council ICC) standards.

In December 2017 the Council completed the project to address significant maintenance issues in the RA Vance Stand. This work was critical to keeping the Basin Reserve as a world-class test cricket venue.

The works firstly involved a refurbishment of the entire exterior of the stand, including replacing the roof and soffits. The next step was the interior and this significant Wellington landmark was ready right on time for the December 1 test match against the West Indies and is all set to last for at least another 50 years. 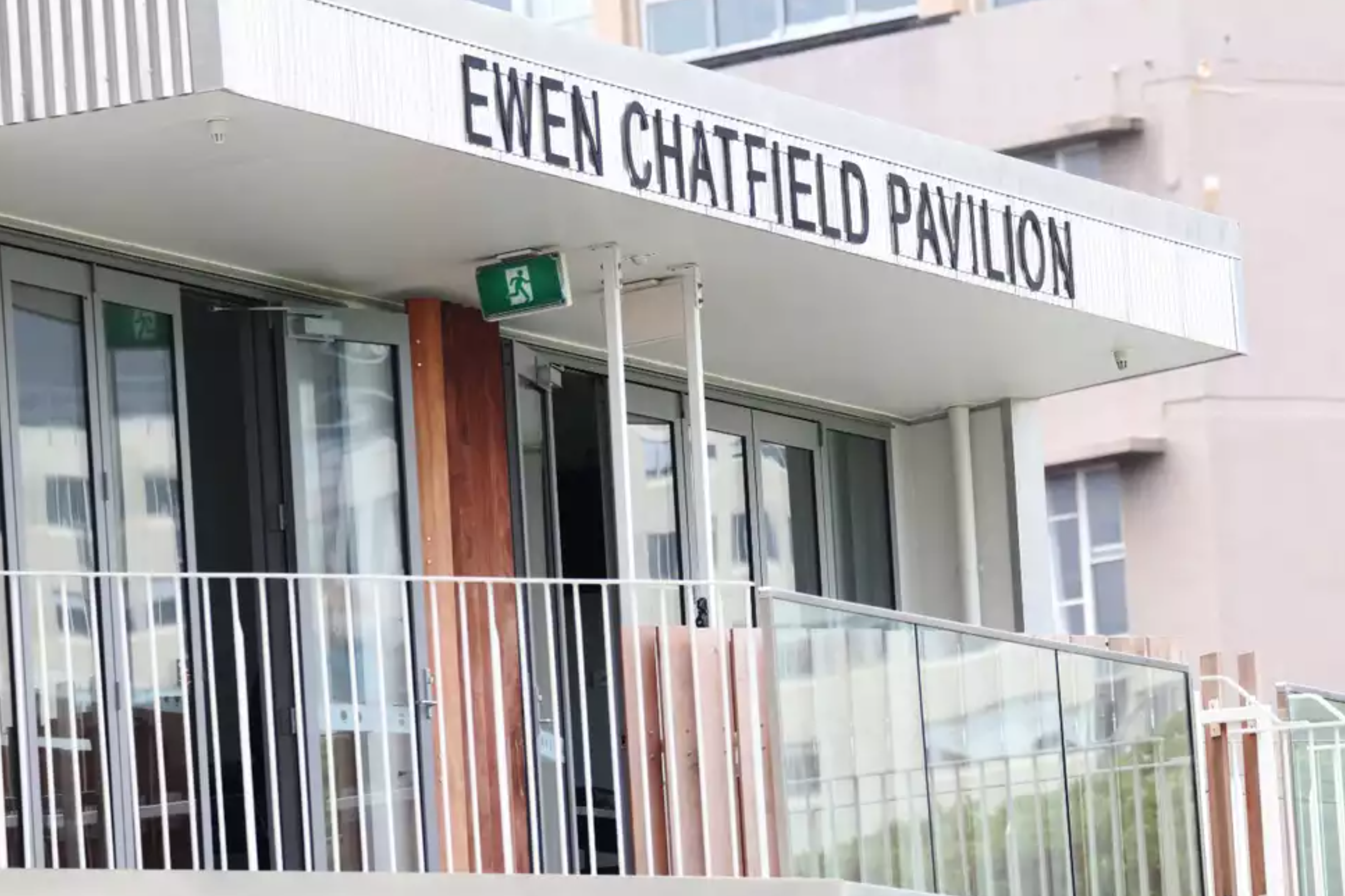 The New Players Pavilion replaces the existing 1970’s Players Common Room and Roof Deck. This was later added to with the addition of an upper level Players’ Viewing Room, Deck and Bridge. The existing building was tired, a seismic risk and no longer functioned to meet the needs of New Zealand’s home of Test Cricket.

The old pavilion was completely demolished creating space for the new building. The existing foundations were extended, and new footings installed to house the new structure.

The ground level has a 115m2 footprint while the upper level has an 85m2 interior area and 37m2 deck area.

The ground level has Hardies Stria Board panels and the upper level has aluminium corrugated cladding with a curved wall at one end.

Hard wood Grappa was used for all of the decking, stair treads and walkway bridge this timber came from a stainable sourced in South America.

The theatre of the incoming batsman’s bridge to the ground is retained with the viewing rooms lifted to allow for around ground truck access.

Outwardly the pavilion is a small but sculpted silver form offering a distinctive element to the necklace of elements around the ground. The form is an expression of views and containment for the teams in the drama of the game and seeks to give character to the Basin’s long tradition of the home to New Zealand test cricket.

The new players’ pavilion which was opened in December 2018 will now be known as the Ewen Chatfield Pavilion.

In 2018 the manual scoreboard underwent a major refurbishment as the existing building was tired, a seismic risk and no longer functioned to meet the needs of New Zealand’s’ home of Test Cricket. The works focused on refurbishing the entire exterior of the scoreboard, including replacing the roof and soffits. This was followed by the interior and was completed with a major new addition being the installation of the 10m by 0.96m high LED panel to the top of the scoreboard. The works will see the scoreboard remain as one of the most iconic of amongst Test venues across the world. 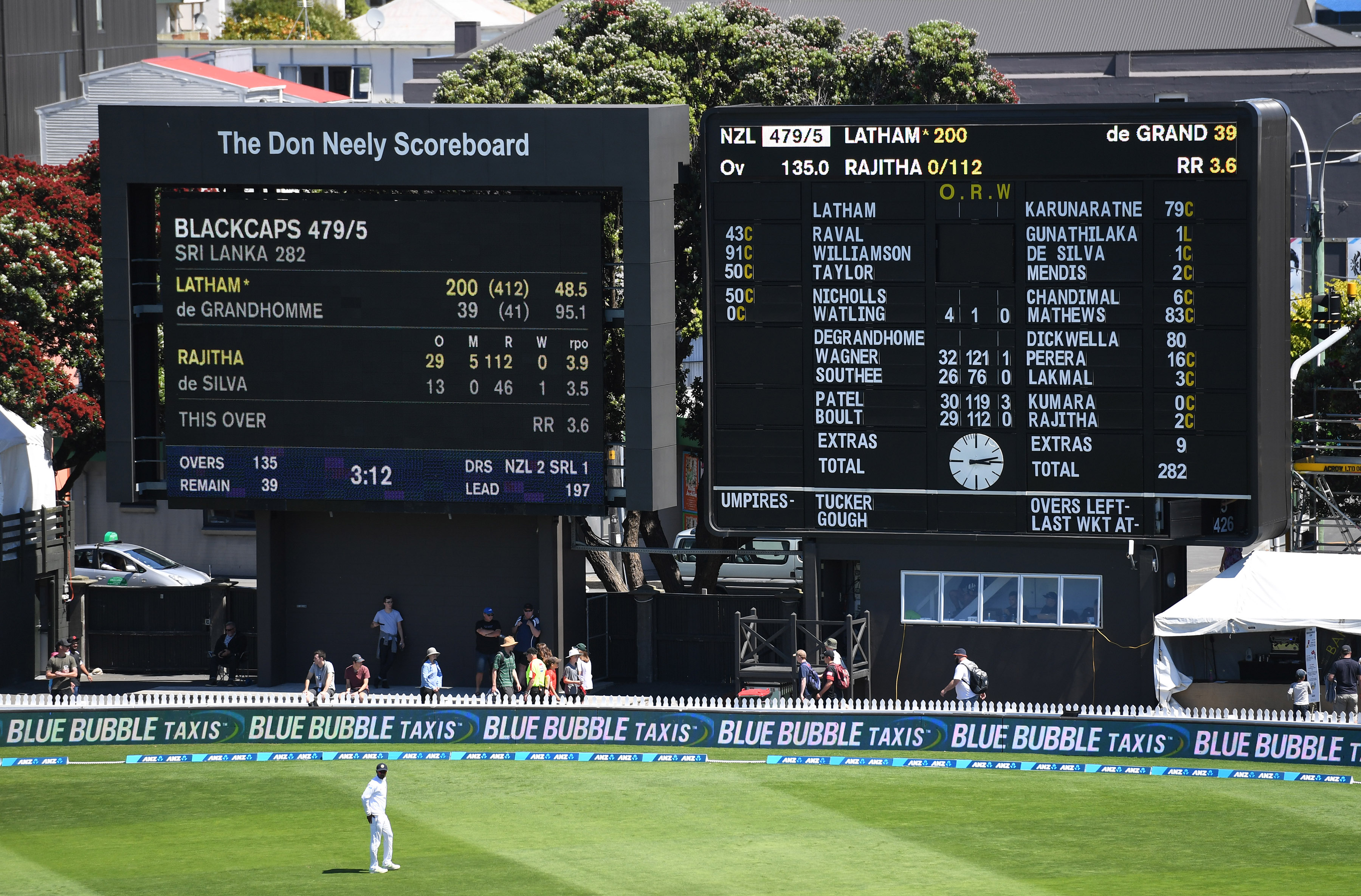 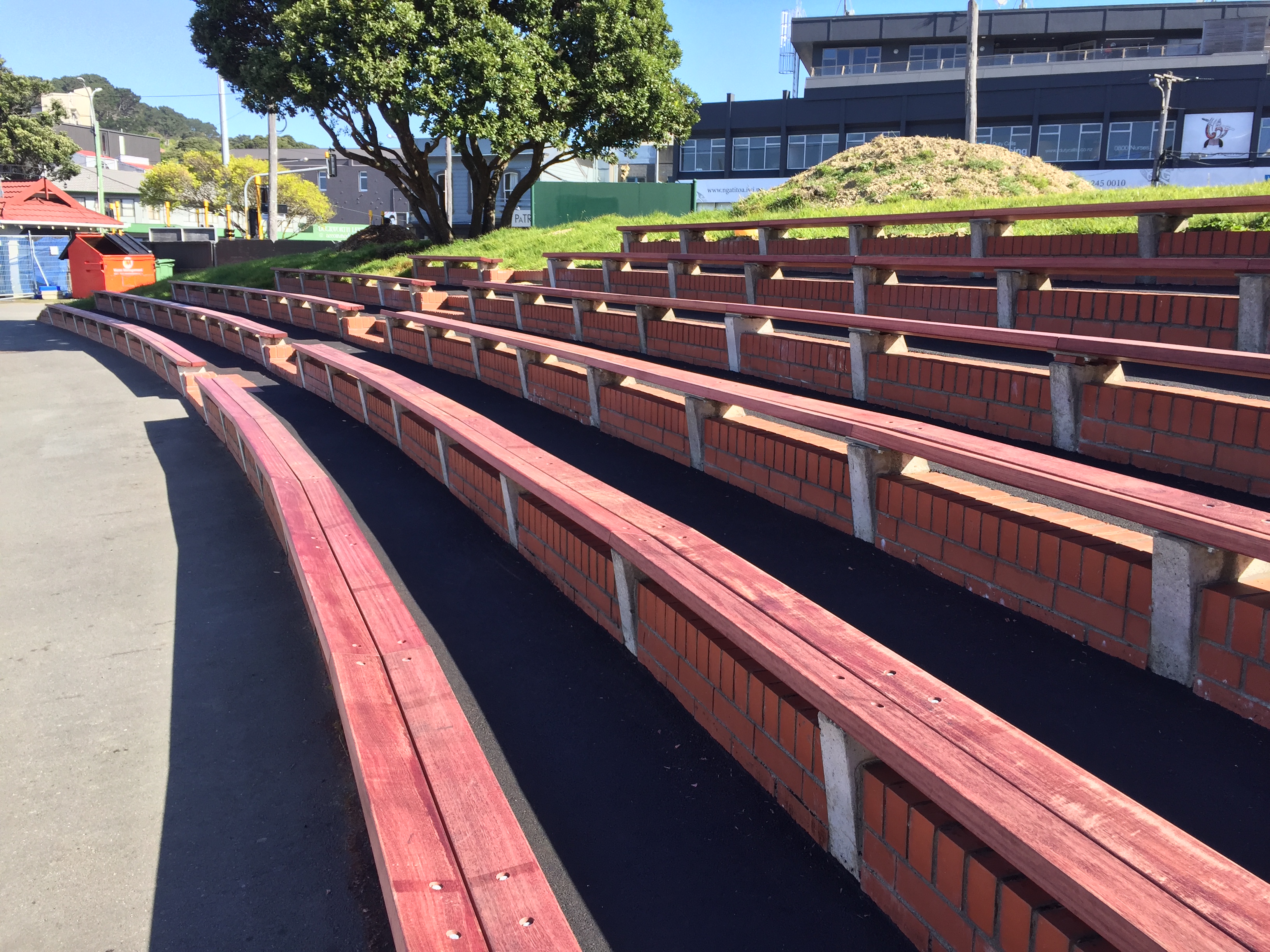 In 2018 we replaced the terrace seating at the south west corner of the Basin. The old rundown timber bench seats that had been there since the early 1980s were replaced with new purple heart timber seating from a stainable sourced in South America. 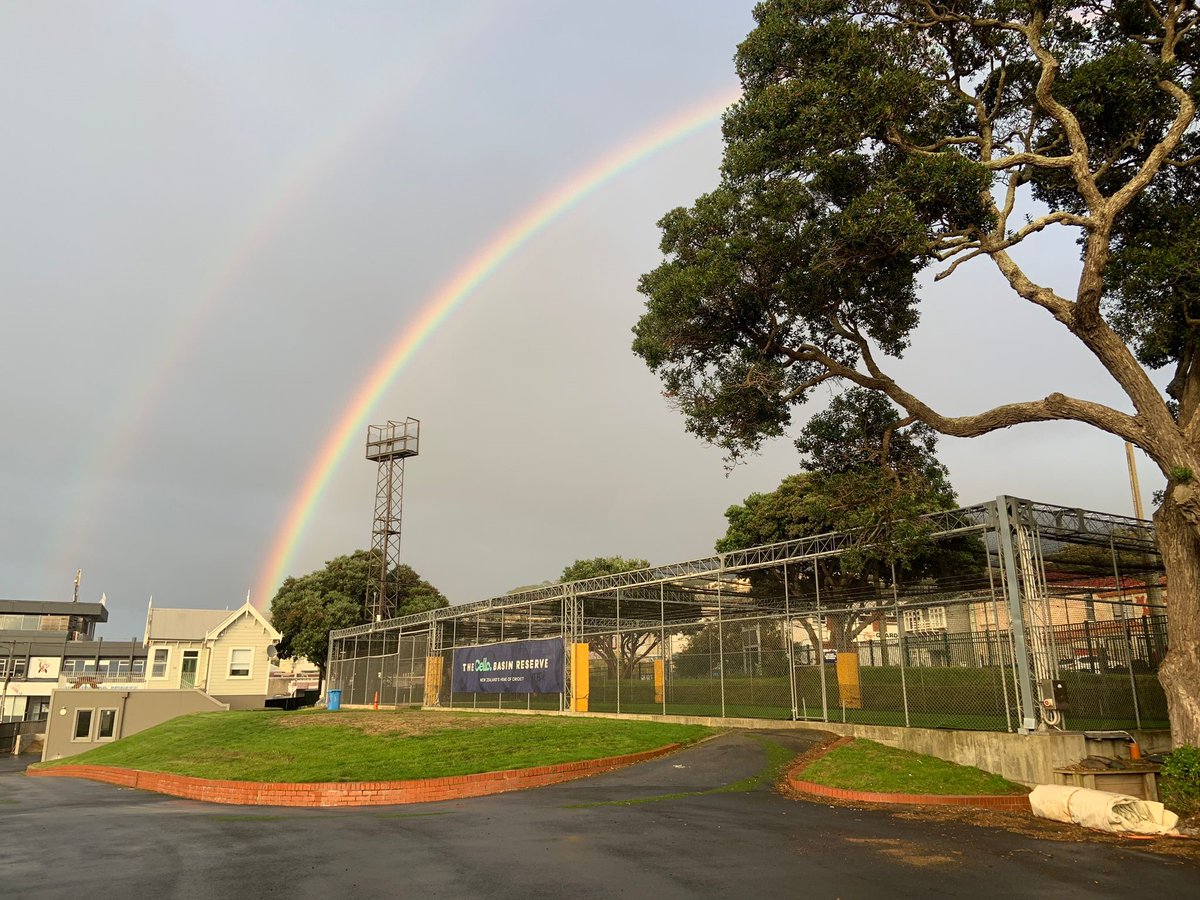 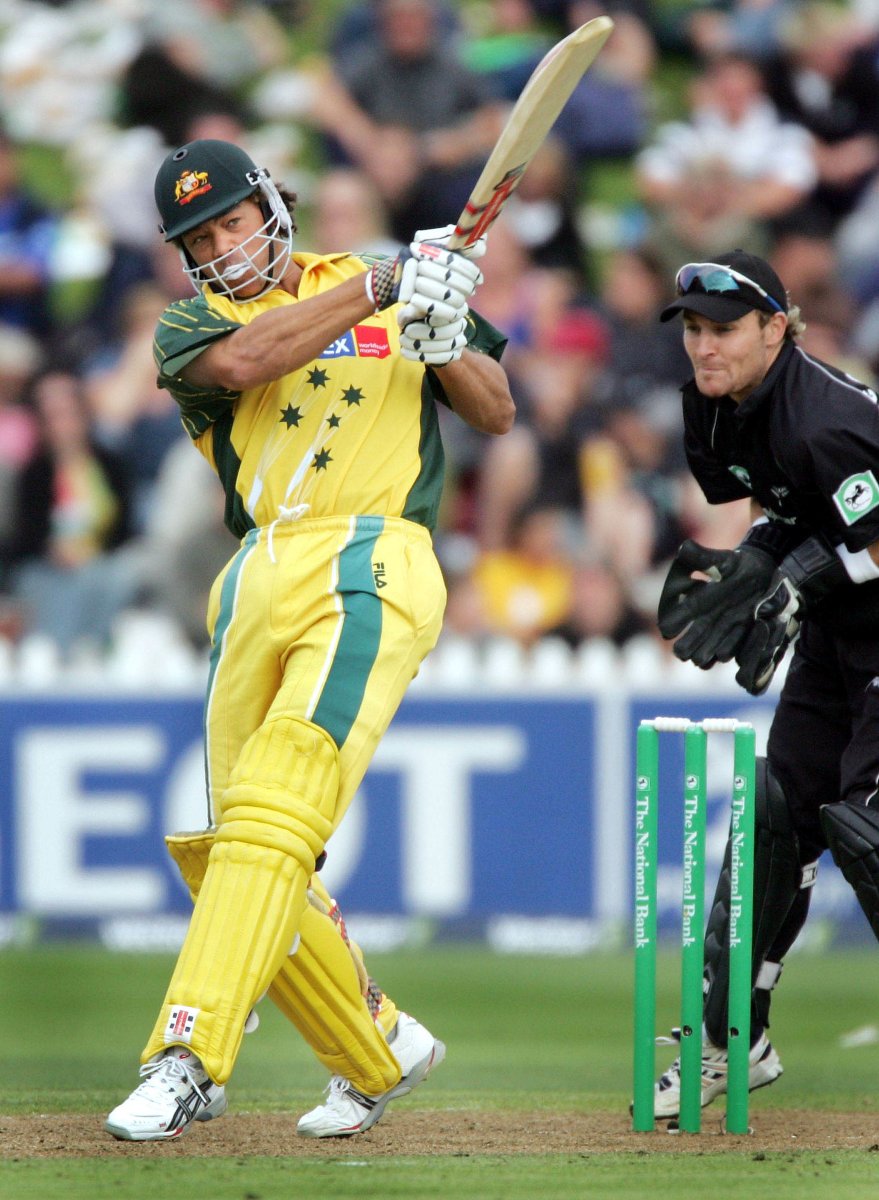 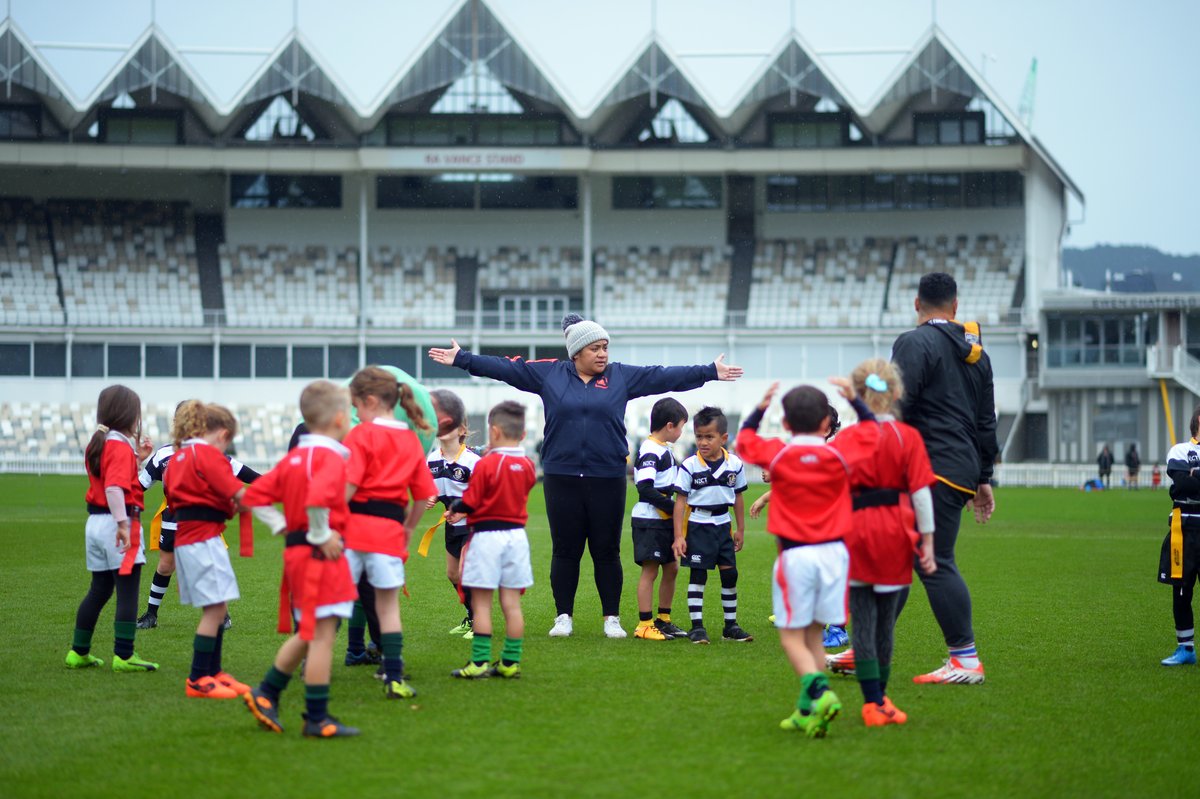